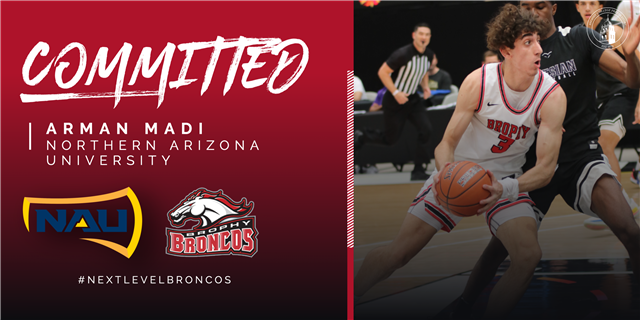 11/8/2022
Brophy senior Arman Madi has decided to attend school and play basketball for in-state Northern Arizona University and will sign officially with the school on Wednesday.

“It really came down to NAU and Dartmouth,” said Madi. “NAU was closer to home and that was the biggest thing. I really like the facilities and coaching staff. NAU really stuck out to me, and I want to be there and play for Coach Burcar. It is important that my family and parents can come to the games.”
Madi also received Division I offers from UC Davis, Portland, Portland State, Nevada, and Eastern Michigan after posting 2021-2022 season averages of 14.7 points per game, 4.0 rebounds, and 2.5 assists while shooting 40.1 percent from beyond the arc as a junior.

“I know some of the guys there on the roster from playing basketball in Arizona and they had great things to say about the school and program,” said Madi. “For me, it is a dream come true. I have always wanted to play Division I basketball. For it to happen and get the opportunity to play at a high level, I am excited to keep playing and getting better.”

His current coach, Matt Hooten, is excited about his standout senior and what lies ahead for him.
“The Lumberjacks are getting a three-level scorer with elite three-point range who led the Brophy basketball team in scoring during both his sophomore and junior years,” said Hooten.  “What makes him even more special, however, is the way that he sees the floor and locates his teammates with pinpoint passes.  There are few players at his size and with his scoring ability that also excel as facilitators in the way that he does.  In addition to his exceptional playmaking abilities, NAU is getting a competitor and someone who will continue to help them build success in the years to come."

Madi was named to the 2021-22 All-6A Conference 1st Team and was the Premier Region Player of the Year. He also earned 6A first-team honors and was selected to the All-Arizona Junior Team by Prep Hoops AZ. He was a 2021-22 All-Academic Honorable Mention by Sports360AZ.

After great success in his last two seasons, Madi hopes to continue winning for the Brophy program in his final season.

“I have been taking on a bigger leadership role this season,” said Madi. “I am looking forward to everything about the senior season. We have a good schedule, and our goal is to win as many games as possible and win the state title. Individually, everything will fall into place as long as we keep winning, playing as a team and I continue to get my teammates involved and grow together.”

Madi will also accomplish a first this season and play with his younger brother Ayden.

“It is cool,” said Madi. “It is one of the first times we have been on the same team since our little AAU days. It is great to be on the court with him, play with him, and help him as much as possible as a player. My parents love it and seeing us both on the court.”

He will participate in the Brophy Collegiate Signing Celebration on campus at 7:20 a.m. on Nov. 9 in the Robson Gymnasium.

“I want to thank coach Hooten, Coach Swartley, and the rest of the Brophy basketball staff,” said Madi. I wouldn’t be where I am today without them. Brophy holds a special place in my heart.”