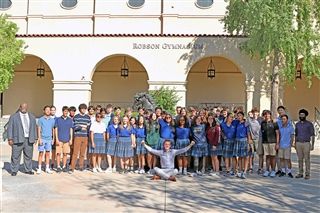 1/17/2023
Brophy and Xavier College Preparatory compete together as the Brophy/Xavier Speech and Debate team, and students from both schools have met with much success this year. Most recently, team members represented at the Harvard Westlake Debates in Los Angeles and also in the Scorpion Spectacular at Mountain Ridge High School.