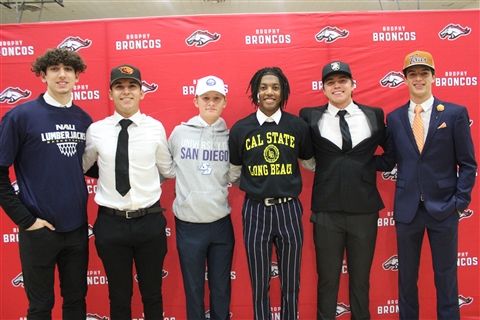 The signees include three Bronco baseball players and student-athletes from the state champion golf team, as well as basketball and track and field squads. They will attend schools in California (3), Oregon, New York and Texas, while joining schools in the Big 12, Pac 12 (2), West Coast and Big Sky Conferences, as well as the Patriot League.
Craig hit .286 for the Broncos as a junior, knocking in nine runs and scoring 12 runs.
“JT Craig is the most disciplined player I’ve coached in my time at Brophy. He is a perfectionist in everything he does which has helped him get to this point. He is borderline obsessed with working hard. At times I want to tell him to ‘slow down’ during drills because of the intensity he brings on every rep. His work ethic, determination, and leadership ability have impacted the people around him and I am looking forward to watching him continue his ways at Army West Point.”
DeCremer posted a junior season where he made 10 starts and pitched 51.1 innings. He recorded a 5-2 record with a 3.47:1strikeout-to-walk ratio and a 1.64 ERA for the season.
“JD is a true “Ace pitcher,” said Garcia. “He’s a competitor that wants the ball in big games. He is a tone-setter for our entire pitching staff and will go down as one of the best pitchers to come through our program. I am proud of what he has accomplished on the field thus far, but prouder of his growth and maturation as a young man over the last four years. JD has a bright future ahead of him and Oregon State is getting an elite competitor.”
Karber helped the Broncos win the 2022 AIA Division I State Championship in record fashion, setting records for both low single-round for both team and tournament scores. He finished tied for fourth overall after rounds of 67 and 70.
“Trevor had a great senior season and was an integral part of our lineup that won the state tournament last month,” said Head Coach Jon Shores. “His performance in Tucson - finishing tied for fourth overall - was a great way to end his Brophy career. USD is getting a great player and we wish him the best.
Madi was named to the 2021-22 All-6A Conference 1st Team and was the Premier Region Player of the Year. He also earned 6A first-team honors and was selected to the All-Arizona Junior Team by Prep Hoops AZ. He was a 2021-22 All-Academic Honorable Mention by Sports360AZ.
“The Lumberjacks are getting a three-level scorer with elite three-point range who led the Brophy basketball team in scoring during both his sophomore and junior years,” said Head Coach Matt Hooten. “What makes him even more special, however, is the way that he sees the floor and locates his teammates with pinpoint passes.
There are few players his size and with his scoring ability that also excel as facilitators in the way that he does.  In addition to his exceptional playmaking abilities, NAU is getting a competitor and someone who will continue to help them build success in the years to come.”

McHenry was fourth at the state meet in the high jump (6-4) and then won the long jump (23-10), earning all-region honors. He reset his PR three times over the summer and earned a pair of All-America honors at national meets,
“Brennen is a self-motivated athlete who continues to put in time, trying new approaches and repeating good habits - around the calendar year. He works on his strength and conditioning, as well as event-specific techniques - intrinsically determined to be the best. Brennen’s positive attitude and energy for working on the details of his track and field events will be contagious at the University of Texas”.
Todd started at shortstop for the Broncos as a junior and helped them reach the 6A playoffs. He led the team in steals with 13 without being caught and had a .405 on-base percentage.
“The minute Nuri Todd stepped foot on campus our school and baseball program got better,” said Garcia. “He’s mature, he is loyal, he is a natural leader, and he possesses all the intangibles a coach wants in a player. Nuri brings so much value to a team in more ways than just statistics. He has a great baseball skill set, but his make-up alone can change a program.”
2022 Brophy Collegiate Signing Day