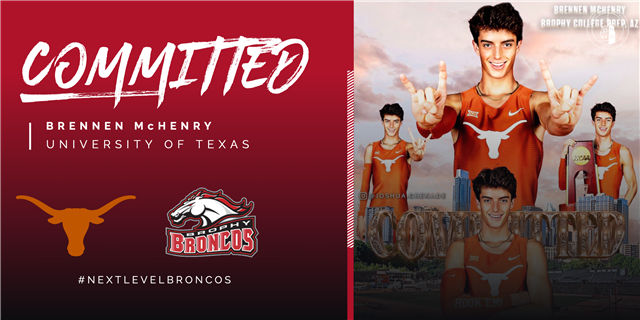 Track and Field’s McHenry to Jump for Texas

11/3/2022
Brophy senior Brennen McHenry has committed to the University of Texas to jump for their defending National Champion track and field team.
“I really wanted to be part of a National Championship team,” said McHenry. “I think I can contribute to help them do it again. I really liked the jumps coach. I could picture myself with all the opportunities they have at school and reaching my potential.”
McHenry, who will study kinesiology at Texas, had the top programs across the country recruiting him including UCLA, Texas A&M, Clemson, and TCU.
But the championship history and facilities caught his eye and eventually his commitment.
“They have some of the best technology and weight room equipment, training, and recovery facilities in the country,” said McHenry.
He will compete for Head Coach Edrick Floreal and jumps coach Jim Garnham.
Three years ago, you could not have predicted this. McHenry played freshman football during his first year at Brophy and then was cut from the basketball team. But it was a perfect example of a student-athlete taking advantage of the opportunities at Brophy. When one door closes...
"I saw Devon Allen and his great accomplishments and said, ‘Let me try track and field’,” recalled McHenry. “I put all my hard work, motivation, and passion for success into it. I have kept going each year, achieving little goals to eventually get this big one.”
The dedication led to a breakout summer after a strong junior season. He was fourth at the state meet in the high jump (6-4) and then won the long jump (23-10), earning all-region honors. He was fifth with a clearance of 6-5 in the high jump at the Nike Outdoor Nationals, earning All-America honors. Then, he earned All-America honors again at the USATF National Junior Olympic Championships after placing second in the 17-18 division at a clearance of 6-6.75. He qualified for the meet with a personal-best 6-10.75 at the Region 10 competition.
“I am excited for the season,” said McHenry. “I want to win but also be consistent. I want to break the Brophy school records again and shoot for the low 7-0 range in the high jump and low 24s in the long jump.”
He enters his senior season ranked fourth overall in the nation in the high jump and 15th in the long jump among the Class of 2023.
“Brennen is a self-motivated athlete who continues to put in time, trying new approaches and repeating good habits - around the calendar year,” said Brophy Head Coach Bill Kalkman. “He works on his strength and conditioning, as well as event specific techniques - intrinsically determined to be the best. Brennen's positive attitude and energy for working on the details of his track and field events will be contagious at the University of Texas”.
He plans to compete in several big events this season including the Arcadia Invitational (he was fourth last season) and the Chandler Rotary (where he will go for a three-peat). His season starts with a two or three meet indoor season including potential meets at Northern Arizona University.
“I have become a big student of the game,” said McHenry. “At meets, I have been able to correct myself and feel what was wrong and correct myself.”
Next week, he will officially become part of the University of Texas program when he signs his National Letter of Intent.
He will participate in the Brophy Collegiate Signing Celebration on campus at 7:20 a.m. on Nov. 9 in the Robson Gymnasium.