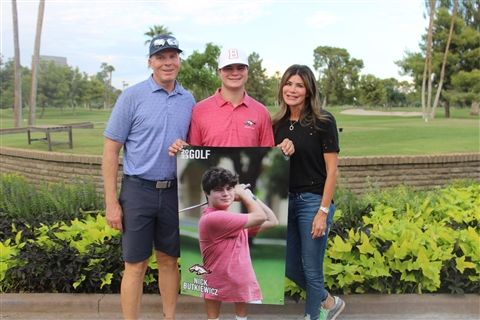 9/20/2022
Senior Nicholas Butkiewicz tied for medalist honors with classmate Charlie Palmer with two-under-par rounds of 34 to lead the Brophy golf team to a 12-stroke victory with a 146 over Liberty (158) and Red Mountain (166) at Phoenix Country Club.

The Broncos played with all five seniors led by Palmer and Butkiewicz. Trevor Karber carded a one-over par 37, while Nico Nuez posted a 41 and Ty Blaicher shot a 45.

For Butkiewicz, it was his second career match in his first season on the varsity team. He was sidelined this summer with a broken wrist but never gave up on his goal to make the team in his final season. “It feels great to be out here and help the team with a great score today,” said Butkiewicz. “There were a lot of good players out here and we have a great team. It feels great to help the team.”

Butkiewicz, who is a National Merit semifinalist, continued to play JGAA events to work on his game to prepare for this moment. He started his round with two birdies and finished with a third to erase his one bogey.

“I was able to get the putter rolling which played a big part in shooting a couple under,” said Butkiewicz. “Hopefully I can continue those types of rounds so I can help the team out.”

“He has been getting noticeably better every year and you can see that in tournaments,” said classmate Charlie Palmer. “He showed his improvement and I am really happy for Nick.”

The Broncos play in the Dobson Classic on Wednesday and Thursday.