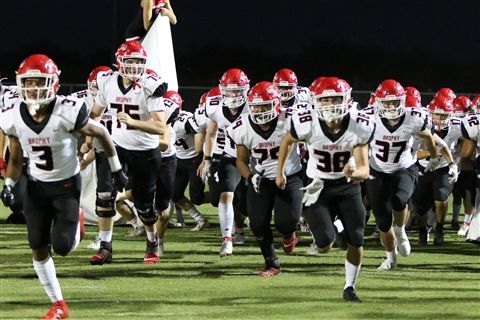 The Arizona Republic has three Broncos listed among the Top 100 in the Class of 2023, including wide receiver Layton Duncan at No. 33. Defensive lineman David Sweetman is listed at No. 59, while free safety Sam Williams is at No. 87.

In the Class of 2024, defensive end Mardale Rowe is No. 11 overall, cornerback Billy Eastep is No. 52 and defensive end Trey Markham is No. 66. Quarterback Charlie McGinnis is ranked at No. 75.

In the Class of 2025, DB/WR Cree Thomas is No. 6 overall. Wide receiver/defensive back Christian Camarata is No. 29 and running back Carlos Estrada is No. 37.

Class of 2023 Top 100
33. Layton Duncan, Brophy Prep, WR, 6-1, 180
He has offers from Idaho State and Morgan State. Interest from Nevada and Northern Arizona. He caught 25 passes in five games, before suffering a foot injury. He's got all the tools to play Division I football.

59. David Sweetman, Brophy Prep, DL, 6-0, 230
A beast at nose guard, he had 19.5 tackles for losses last season. Strong and quick off the snap, was an all-state wrestler. Made second-team all-region in football.

87. Sam Williams, Brophy Prep, FS, 6-1, 190
He's ready to take that next big step in his development. Showed signs of being a dominant safety last year when he ended up being an all-region honorable mention. He has a 3.8 GPA and is getting FCS academic type of attention.

Class of 2024 Top 100
11. Mardale Rowe, Phoenix Brophy Prep, DE, 6-2, 230
Offers include Oregon, Arizona, Utah State, Marshall and Nevada. He made first-team all-region last season in a region deep in defensive linemen. Very quick and explosive off the edge. Continues hard work to develop into what could be a monster junior season.

52. Billy Eastep, Brophy Prep, CB, 5-11, 180
His recruiting has ramped up this spring as he combined lacrosse with football. He was named the top defender in the Division I state lacrosse championship game that Brophy won. Fast, agile, aggressive.

66. Trey Markham, Brophy Prep, DE, 6-3, 215
A two-sport athlete who started on the baseball team. He had significant playing time on varsity football as a sophomore when he had 29 tackles, 1.5 sacks and five QB hurries.
75. Charlie McGinnis, Brophy Prep, QB, 6-3, 210
He could become one of the top breakout players of the year after serving as a backup to Elijah Warner last season. Has the size, skills, arm strength, and accuracy to get on the coaches' radar.
Class of 2025 Fab 50
6. Cree Thomas, Phoenix Brophy Prep, DB/WR, 5-11, 150
Coach Jason Jewell believes Thomas could be the next Ben Morrison, a top 2022 cornerback, who will be playing his college football at Notre Dame. Thomas is one of the best track and field high jumpers in the state. Combine his athleticism with sure hands and disciplined route running, he could become a major factor on offense. But cornerback could be his college calling.
29. Christian Camarata, Brophy Prep, WR/DB, 5-9, 165
One of the more versatile athletes in the 2025 class, he can stand out pretty much anywhere on the field. Expect to see him play running back, receiver and defensive back next season on varsity in what is a loaded 2025 class at Brophy.

37. Carlos Estrada, Brophy Prep, RB, 5-5, 155
Has a chance to be special. Has speed and elusive moves to go with good hands coming out of the backfield to catch passes.