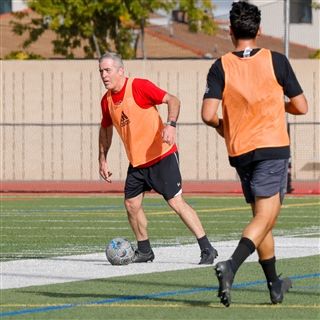 4/13/2022
PHOENIX, April 13, 2022 – Today, Principal Bob Ryan announced that former head coach Marc Kelly will return to the helm of Brophy’s soccer program. Kelly, a 1987 Brophy graduate, coached the Broncos from 2001 through 2013, leading the team to state titles in 2008, 2011 and 2013 and amassing a record of 242-21-5.
In making the announcement, Ryan said, “Marc is not only an accomplished coach, he is a veteran teacher and Ignatian educator, having taught at Brophy since 2000. As such, his passion for the game and tactical expertise will be significantly complemented by the fact he is immersed in Brophy’s culture as a teacher on campus each day. We are excited to have the program back in his capable hands.” Kelly teaches ceramics and sculpture in Brophy’s art department and serves as the technical director in the theater department.

Kelly played soccer at Brophy and at Gonzaga University. In addition to coaching at Brophy, he has coached with the Arizona Olympic Development Program and at the community college level. In 2012, the National Soccer Coaches Association of America named him the Region 4 (nine western states) High School Coach of the Year.