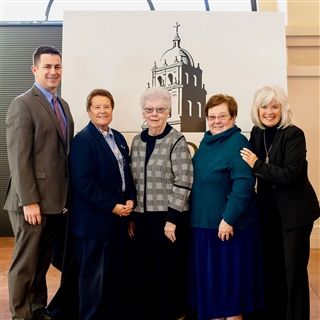 2/8/2022
Each year, Brophy presents the Inés Pascual Award at the Mother-Son Communion Breakfast, with this year's award going to the leadership team at Xavier College Preparatory — Sister Joan Fitzgerald, president; Sister Joanie Nuckols, principal; and Sister Lynn Winsor, director of student activities and athletic director. Sister Joan, Sister Joanie and Sister Lynn all came to Xavier in 1974 and in the almost four decades since, have been steadfast partners and great friends to Brophy and Brophy's leadership.

That friendship was acknowledged in the citation read at the awards ceremony. The history of Brophy and Xavier is intertwined, as are the lives of many of the families and students. We are grateful.

The award is named for Inés Pascual, a Spanish noblewoman who supported Ignatius of Loyola in his journey to becoming a priest and founder of the Society of Jesus — the Jesuits. For more on the award, including a list of past recipients, click here.