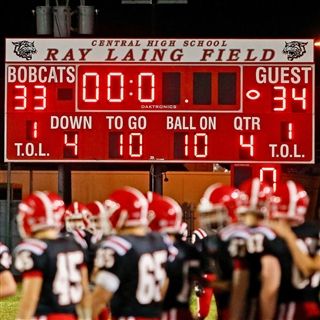 6/18/2021
Effective with the 2021 AIA football season, Brophy will use Central High School's Ray Laing Field as its home venue for varsity football. The freshman and junior varsity teams will continue to play at Brophy Sports Campus.

Brophy has had a partnership with the Phoenix Union High School District for several years, providing their swim teams with the use of Brophy's Edward A. Reese, S.J. Aquatic Center at no charge. This partnership will now also include allowing Brophy the use of Ray Laing Field. Brophy Principal Bob Ryan comments, “I’m grateful to Central High School, the Phoenix Union High School District and district superintendent, Dr. Chad Gestson, for their partnership. I look forward to playing our football games at Ray Laing Field and to deepening the collaboration between our school communities.”

In addition to being longtime neighbors, Brophy and Central High School share some football history. The field's namesake, Coach Laing, led the Central Bobcats to both their state championships — in 1969 and 1972. He also coached at Brophy for seven seasons beginning in 2009. His nickname was FOG which stood for the name he conferred on himself — 'friendly old guy.' Coach Laing passed away in January 2016 and the Broncos dedicated their 2016 season to him, wearing 'FOG' decals on their helmets.

Former Brophy varsity head coach Scooter Molander was part of an effort to have the Phoenix Union High School District name Central's football field in Laing's honor. On Oct. 28, 2016, the Ray Laing Field at Central High School was dedicated with a delegation from Brophy present.

Brophy opens their varsity season against St. Mary's at 7 p.m. on Sept. 3, at home. The 'old school' rivals have not played each other since 2013. For a full varsity football schedule, click here.