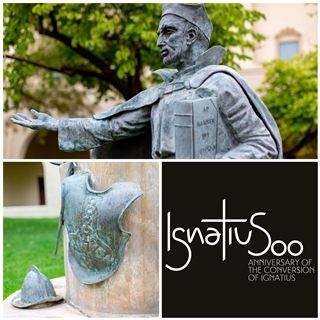 5/20/2021
At the Battle of Pamplona in 1521, Ignatius of Loyola, then an officer in the Spanish army, had his leg shattered by a cannonball. This event five centuries ago marked the beginning of Ignatius's conversion which would lead to the formation of the Society of Jesus in 1534. (Ignatius and the Jesuits received their official charter from Pope Paul III in 1540.)

As Ignatius recuperated from his injury, he read about the life of Christ and many of the saints, beginning a period of reflection, or discernment, that would change his life completely and eventually take him from soldier to saint. In Ignatian spirituality, the rich and reflective theology that the writings and teaching of Ignatius, St. Francis Xavier and many other Jesuits would produce, a "cannonball moment" has come to describe any catalyst leading to an awakening, conversion or notable change in someone's life.

On May 20, 2021, we marked the 500-year anniversary of Ignatius's cannonball moment. Father General Arturo Sosa, SJ, has called us to celebrate May 2021 through July 2022 as an Ignatian Year, with the theme, "To see all things new in Christ." At Brophy, we look forward to hosting a series of Ignatian Spirituality Retreats over the next year and inviting the community to join us in seeing all things new with Christ.

Below you will find links to other resources and a message from President Adria Renke.