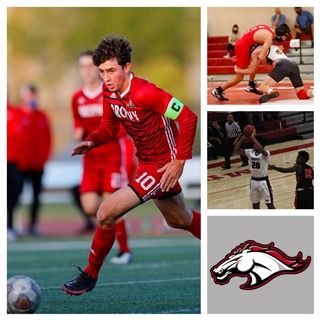 4/16/2021
AIA winter sports wrapped their seasons a little later than in past years due to pandemic-related postponements. It was a good year for Bronco soccer, basketball and wrestling.

Soccer, under the direction of Coach Paul Allen '03, scored a "three-peat" winning their third consecutive state title, and the 10th in program history. With only one regular-season loss, the Broncos cruised through the playoffs, ultimately meeting San Luis in the title match. A tied score with no points put on the board during overtime brought the game to a penalty kick shootout. The Sidewinders sent a ball hurling down the field, but Brophy goalie Bryan Figueroa '21 blocked it, giving the win to the Broncos.

Brophy basketball, under the direction of Coach Matt Hooten, went into the playoffs as a top 8 seed for the fifth year running. Winning decisively in the first rounds, the Broncos reached the semifinals where they were stopped by the eventual champion, Sunnyslope.

Brophy wrestling, under the direction of Coach Wayne Catan, ended the season with two Broncos on the podium at state. Sophomore David Sweetman who had dominated opponents all season in the 182-pound category, finished third, and freshman Ty Trickle, a talented newcomer, finished fourth in the 126-pound category.