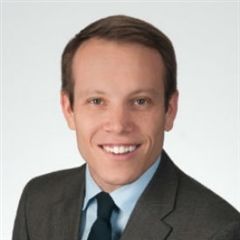 This award is given annually to a recent alumnus (15 years or fewer) who, after graduation from Brophy, seeks to deepen his commitment to the ideals of Jesuit education in remarkable ways. Like St. Francis Xavier, who was moved by his encounter with Ignatius to boldly and selflessly live Ad Majorem Dei Gloriam – for the greater glory of God – the recipient of this award has been moved by his Jesuit education to find unique points of intersection between his talents and the needs of the world. Brophy is happy to announce that Daniel B. Englander ’04 has been named the 2016 recipient of the St. Francis Xavier Award for Ignatian Identity.
Dan’s embrace of Brophy’s Jesuit charism can be traced back to his junior year of high school. In addition to serving as captain of the tennis team and a member of the Honors Band, Dan spent more than 200 hours serving as a translator at Mission of Mercy, a mobile clinic in Phoenix and Mesa that provides free healthcare to those that cannot afford it. As a translator, Dan employed the Spanish he was learning at Brophy to listen not only to the patients’ most intimate health problems, but also their daily struggles. It was during this process that Dan's perspective on the world began to shift.
In college at Duke University, Dan’s interest in accessible health care led him to pursue a major in Public Policy Studies and Economics, where most of his classes had a health care focus. He spent a summer working as an HIV educator in rural western Kenya in 2005, and won a competitive fellowship in 2006 from Duke’s Hubert-Yeargan Center for Global Health to work as a policy analyst for HIV prevention programs in Lilongwe, Malawi. He then served as the first student fellow at the Duke Global Health Institute and served on the Board of Directors of Global Health Plus, an organization that sends used medical supplies from Duke University Hospital to the developing world. In 2007, he was elected by his peers as the only student member of the Duke University Board of Trustees Medical Center Affairs Committee.
While in college, Dan was also a devoted member of the staff of The Chronicle, Duke's independent daily student newspaper. He was the lead editor of the opinion pages during the Duke lacrosse scandal, where he was faced with the daily challenge of publishing fair and well-researched editorial pieces during a period of great controversy, uncertainty, and scrutiny.
After working for an internet start-up in North Carolina following his graduation from Duke, Dan enrolled in law school at Emory University. At Emory, Dan was elected by his peers to serve as editor-in-chief of the Emory International Law Review, where he led a staff of 60 student editors, and published an extra issue dedicated to exploring Sharia law in a global perspective.
Since graduating from law school in 2012, Dan has logged hundreds of hours on pro bono matters, has been recognized by numerous organizations for his pro bono work, and was recently appointed to the national Pro Bono Committee of his law firm, Ballard Spahr LLP.  In 2013, he represented an 88-year-old man who was living in Section 8 housing that was infested with bed bugs. Dan spent nearly a hundred hours fighting for his client to be able to move to a clean and safe apartment and making sure all his client’s belongings were either properly treated or replaced via donations from Dan’s friends and coworkers. Three years later, Dan continues to visit with his client and regularly takes him grocery shopping.
It is with great pride that Brophy recognizes Dan Englander '04 with the St. Francis Xavier Award for Ignatian Identity.
Back