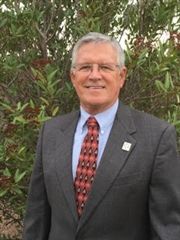 This award is given annually to a Brophy alumnus whose life and life’s work exemplify a sustained commitment to the values of Jesuit education. This is the Brophy community’s affirmation of one alumnus who is recognized and honored for the ways he personifies the Brophy Graduate after Graduation. The recipient of this award, like St. Ignatius, has earned the respect and admiration of the community because of the significant impact he has had on the lives of others, particularly those most vulnerable. Brophy is happy to announce that Thomas P.  McCabe ’66 has been named the 2016 recipient of the St. Ignatius Loyola Award for Distinguished Service.
When the Brophy Alumni Council recently considered which alumnus has “earned the respect and admiration of the community,” Tom McCabe’s name jumped off the page. For the quiet, consistent, and humble ways he has modeled faithful service to Brophy and the broader community, Tom was the obvious and unanimous choice of the committee for this award.
Tom learned the value of serving his community at an early age when he accompanied his father on home visits for St. Vincent DePaul. These trips with his dad set the stage for what would become a lifetime of humble and faithful service. The values he learned at home and that were reinforced during his years at Brophy led Tom to serve his country as a member of the United States Air Force Reserve, 302nd Aerospace Rescue and Recovery Squadron. In his professional life, during his career in the aerospace industry, Tom has consistently found opportunities to serve his local community and the beneficiaries of his energy include youth sports, the Make-A-Wish Foundation, charity golf tournaments, St. Mary’s Food Bank, and the NFL Experience.
The seeds of faith that were planted in Tom as a child and that germinated during his time at Brophy have taken root throughout his adult life in the ways he has lived his faith at St. Timothy’s parish and beyond. He has been an active member of St. Tim’s since 1984, serving as a lector, volunteer with the youth ministry program, and as a Eucharistic Minister to the hospitalized and homebound. His most meaningful involvement, though, originated when he and his wife participated in the parish JustFaith series. This program exposed Tom to the work of Fr. Greg Boyle, S.J. and his book Tattoos on the Heart. Moved by Fr. Boyle’s belief in the inherent dignity of all people, Tom became involved in prison ministry and, since 2010, he has been leading Communion Prayer Liturgies at the 4th Avenue Jail. He and his wife Patty also support the Kino Border Initiative and they have twice organized, at the diocesan level, a Mass to remember migrants who have died trying to cross the desert.
Lastly, Tom has been a loyal and active member of the Brophy alumni community. Later this year, Tom and his classmates will celebrate their 50th reunion and Tom is the class captain and chief organizer of the event. As a member of the Brophy Alumni Council, Tom has helped coordinate the annual alumni service projects at St. Mary’s Food Bank. Last year, he expanded the reach of the Brophy alumni community by initiating a monthly service opportunity at Circle the City.
Tom and Patty are the proud parents of Chris ’91, his wife Nikki, and their children Alanah, Caitlyn and Conor; and his daughter Andrea, her husband Ben and their children Hannah, Faith and Tessa.
Brophy is most proud to honor Thomas P. McCabe, a true Man for Others, as the 2016 recipient of the St. Ignatius Loyola Award for Distinguished Service.