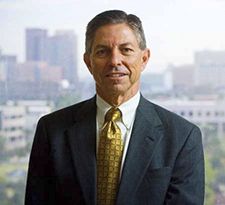 This award is given annually to a Brophy alumnus whose life and life’s work exemplify a sustained commitment to the values of Jesuit education. This is the Brophy community’s affirmation of one alumnus who is recognized and honored as the embodiment of the Brophy Graduate after Graduation. The recipient of this award, like St. Ignatius, has earned the respect and admiration of the community because of the significant impact he has had on the lives of others, particularly those most vulnerable.
Brophy is happy to announce that Tom Manos ’70 has been named the inaugural recipient of the St. Ignatius Loyola Award for Distinguished Service.

After graduating from Brophy in 1970, Tom earned a degree in Finance from Arizona State University. Tom then moved to Liberia, West Africa as a Peace Corps volunteer. In Liberia, Tom combined his passion for service, nurtured at Brophy, with his skills in finance and accounting that he learned at ASU, and helped rural farmers and small business owners secure low interest loans. Ever since his return from Liberia, Tom has spent his life leveraging his significant financial and accounting acumen in the service of the common good. He spent eight years with the City of Phoenix before taking a position with Maricopa County. From 1984-2008, Tom worked for Maricopa County, eventually becoming the Chief Financial Officer for the county, a position he held for ten years.

Among his most significant achievements during his time with Maricopa County was his role in the development and construction of the Human Services Campus in downtown Phoenix. This ten-acre facility centralized a variety of agencies that provide services to the homeless of Phoenix. The creation of the campus in 2005 represented an almost unprecedented partnership between the private sector, the nonprofit community, and government agencies at every level. Tom played a pivotal role in fostering collaboration and securing financing for the $23 million project which today provides critical services to the most vulnerable members of our community.

After “retiring” from Maricopa County, Tom was asked by Governor Brewer to help solve the state’s massive budget deficit. So, Tom joined the Governor’s staff in January 2009 as the Deputy Chief of Staff for Finance and Budget. Upon walking into his office, the state faced a three-billion-dollar deficit. Ten months later, Tom had played a key role in the difficult yet successful effort to balance the state’s budget.

After this effort, Tom returned to the Human Services Campus to serve as its co-manager. In this role Tom oversaw all operations on the massive campus and for this work he accepted only an annual salary of $1. In March 2012, Tom was called upon by Maricopa County once again when he was asked by the Board of Supervisors to become the County Manager, a position he currently holds.

In addition to his lifetime of public service, Tom’s commitment to Brophy is also noteworthy. He is a member of the Alumni Organizational Board and was the principal instigator behind the annual Good Friday alumni service project of feeding the homeless. For the last three years this event has brought Brophy alumni to the Human Services Campus to provide over 800 meals to the homeless in downtown Phoenix. And as a way to honor his son Steven, who passed away in 2008, and other deceased members of the Brophy community, Tom helped launch Brophy’s annual Mass for Deceased Alumni.

Tom and his wife Jean celebrated the graduation of two sons from Brophy: Steven from the class of 2000, and Ryan of the class of 2011. Their daughter Amie is a graduate of Xavier and a current faculty member at St. Francis Xavier school.

Brophy is proud to honor Tom Manos as the inaugural recipient of the St. Ignatius Award for Distinguished Service.