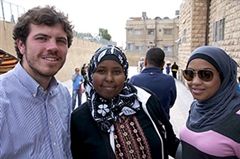 This award is given annually to a recent alumnus (15 years or fewer) who, after graduation from Brophy, seeks to deepen his commitment to the ideals of Jesuit education in remarkable ways. Like St. Francis Xavier, who was moved by his encounter with Ignatius to boldly and selflessly live Ad Majorem Dei Gloriam – for the greater glory of God – the recipient of this award has been moved by his Jesuit education to find unique points of intersection between his talents and the needs of the world.
Brophy is happy to announce that Colin Gilbert ’03 has been named the inaugural recipient of the St. Francis Xavier Award for Ignatian Identity.

During his time at Brophy, the seed of Colin’s commitment to Jesuit education was planted during an immersion trip to Juarez, Mexico. Upon his return, he became heavily involved at DUCK (Downtown Urban Community Kids) first as a volunteer and later as a staff member. Brophy’s relationship with DUCK continues to this day. After graduating from Brophy in 2003, Colin attended Loyola Marymount University. While at LMU, Colin deepened his commitment to service by establishing the Underwings After-School Program, a program that has served over 2,000 inner-city immigrant youth through tutoring and mentoring at the Dolores Mission Church. Colin graduated Cum Laude from LMU in 2007 with degrees in Theology and Spanish.

In the year after graduating from college, Colin spent time volunteering with several NGOs in Latin America including a center for youth in Ecuador and Jesuit Refugee Services in Colombia. He finished this self-described year-long pilgrimage by making the 30-day retreat with the Jesuits. In July 2008, he joined the faculty of Xavier College Preparatory in Palm Desert, California. He taught theology and established a service learning program for the school. While at Xavier, his summer ‘vacation’ consisted of time spent working at St. Al’s Secondary School for AIDS Orphans in Nairobi, Kenya and then the following summer he volunteered as an Advocacy Assistant at the Israeli Committee Against Housing Demolitions in Jerusalem.

In January 2011 Colin moved to Amman, Jordan to take a position with Jesuit Refugee Service. Only months later, civil war broke out in Syria and Colin found himself thrust into a leadership position on the front lines of one of the most tragic humanitarian crises of our day. In the fall of 2011, Colin was named Country Director for Jesuit Refugee Services in Jordan and as such, played a key role in leading JRS’ response to the Syrian civil war and the refugee crisis in Jordan. He developed a robust education and emergency aid operation which served 15,000 refugees in three cities in Jordan while supporting massive expansion of programs in Syria.

Colin returned to the United States in the spring of 2014 and is currently working with a start-up, Accelerate Change, which is using entrepreneurship to catalyze social change for immigrants in the U.S. He is also pursuing a Master of Education and Entrepreneurship at the University of Pennsylvania.
Brophy is proud to honor Colin Gilbert as the inaugural recipient of the St. Francis Xavier Award for Ignatian Identity.