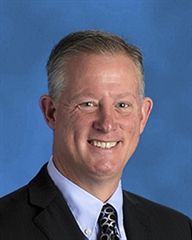 This award is given annually to a Brophy alumnus whose life and life’s work exemplify a sustained commitment to the values of Jesuit education. This is the Brophy community’s affirmation of one alumnus who is recognized and honored for the ways he personifies the Brophy Graduate after Graduation. The recipient of this award, like St. Ignatius, has earned the respect and admiration of the community because of the significant impact he has had on the lives of others, particularly those most vulnerable. Brophy is happy to announce that Marc Ashton ’84 has been named the 2015 recipient of the St. Ignatius Loyola Award for Distinguished Service.
At Brophy, Marc had the opportunity to develop two skills that have come to define his service to the community. First, he was known for his spirit and his ability to rally his community. As a senior it was only natural then, that he became the Brophy Bronco. Marc also learned what he is capable of when he leveraged this ability in response to a tragedy or a need in the community. When one of his classmates, Tom Davison, was involved in a terrible car accident that left him paralyzed, Marc and his friends responded by rallying the community and raising funds. As a tribute to Tom and his classmates’ spirit of friendship and community, Brophy annually presents the Tom Davison Loyalty Award to a graduating senior.After graduating from Northern Arizona University, Marc leveraged his charisma and community building skills into a successful career in pharmaceutical sales and hospital administration. Marc’s life changed when his son, Max, was born in 1996. When he was three months old, Max was diagnosed with Lebers Congenital Amaurosis, a genetic eye disease that took most of Max’s eyesight. While most people would have been depressed and defeated by this news, the 1984 Brophy Bronco was not. Marc and his wife, Lisa, were introduced to the Foundation for Blind Children (FBC). Max began receiving services and attended the FBC preschool.

Almost immediately, Marc joined the board and began fundraising for FBC. He was, to say the least, an active board member. He raised $50,000 from the Del E. Webb Foundation and then turned to his Brophy classmates, Jim Stelzer and Mike and Jeff Mastro, who turned a small backyard fundraiser into the annual “Night for Sight” at Dominick’s Steakhouse. In the years since, this event has raised more than $4,000,000 for FBC.

In 2007, FBC approached Marc and asked him to become their Executive Director. Motivated by a desire to provide every blind child in Arizona the same opportunities his son had, Marc accepted the challenge and has been the Chief Executive Officer of the Foundation for Blind Children since then. Over the past eight years, Marc has guided FBC through tough financial times. He put his business acumen to work and paid off all FBC’s debt and increased programming. FBC is now nationally recognized as the leader in the education of blind children. Families from all over the world move to Phoenix in order for their children to obtain FBC services. This past August, the Foundation proudly opened its beautiful new facility that is a tribute to Marc’s leadership and the $10,000,000 he raised for the children who will now benefit from the largest preschool for blind children in the country.

More remarkable than the money he has raised or the facilities he has built is what Marc has done for the public perception of blind children and adults. Marc is fond of saying that, “Blindness is a diagnosis not a disability.” In 2009, Marc lead a team of eight blind climbers to the top of Mount Kilimanjaro. His son, Max, became the youngest blind climber to ever summit Africa’s tallest peak. In 2010, Marc led a team of blind hikers from rim to rim of the Grand Canyon in a single day. Then in 2013, Marc led three blind swimmers across Alcatraz. In each of these adventures, Marc galvanized members of the Brophy community to serve as guides on the trips and to help instill confidence in the children.

Brophy is most proud to honor Marc Ashton ’84 as the 2015 recipient of the St. Ignatius Loyola Award for Distinguished Service.
Back