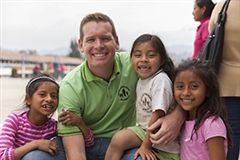 This award is given annually to a recent alumnus (15 years or fewer) who, after graduation from Brophy, seeks to deepen his commitment to the ideals of Jesuit education in remarkable ways. Like St. Francis Xavier, who was moved by his encounter with Ignatius to boldly and selflessly live Ad Majorem Dei Gloriam – for the greater glory of God – the recipient of this award has been moved by his Jesuit education to find unique points of intersection between his talents and the needs of the world. Brophy is happy to announce that Christopher Hoyt ’01 has been named the 2015 recipient of the St. Francis Xavier Award for Ignatian Identity.
Chris currently lives in San Andrés Itzapa, Guatemala, where he serves as the National Director for Nuestros Pequeños Hermanos. This assignment alone is worthy of the Brophy community’s respect and admiration, but Chris’ current work in Guatemala is only the most recent example of his remarkable commitment to the values that Brophy seeks to cultivate.

Chris graduated from Brophy in 2001 and in 2005 he earned dual degrees in Film/TV Studies and Spanish from the University of Notre Dame. Chris’ formal education also includes a Master of Public Administration from the University of Kansas. While Chris’ impressive educational background has provided him with important technical knowledge and skills, his most formative teachers have been the orphaned and vulnerable children to whom he has dedicated the last ten years of his life.

Upon graduating from Notre Dame, Chris moved to Cuernavaca, Mexico and spent three years as the Director of Volunteers and General Activities for the Nuestros Pequeños Hermanos Orphanage. Chris and his colleagues provided a home and schooling for over 800 abandoned and orphaned children. Specifically, Chris provided full time parental, tutoring, and mentoring support to 40 adolescent boys. After three years in Mexico, Chris moved back to the U.S. for graduate school. While attending the University of Kansas, he served as the Director of the Precious Blood Volunteers, overseeing a program that provided recent college graduates with transformational service opportunities like the one he experienced in Mexico.

When he finished graduate school, Chris returned to his real teachers, this time in Sub-Saharan Africa. Chris spent his first four months in Cameroon and then worked for Catholic Relief Services in Malawi, collaborating on programs that served more than 15,000 vulnerable children affected by HIV and AIDS. He was one of 25 people chosen from among 600 applicants for this program designed to identify future country representatives for an international agency implementing U.S. AID grants in 60 countries.

In June 2013, at the age of 30, Chris became the national director for the NPH orphanage in Guatemala. In this capacity, Chris is the legal guardian for 300 children entrusted to NPH through the Guatemalan court system. He supervises all programming for these orphaned, vulnerable and sometimes, abused, children, including childcare, Montessori preschool, primary school, junior high, and five technical trade workshops, in addition to managing a high school and university scholarship program. Chris’ reach extends beyond Guatemala since he was elected by his peers to serve as the Lead National Director for NPH and in this role, he provides key support to the NPH facilities across nine countries that serve more than 3,500 children.

Brophy is most proud to honor Christopher Hoyt ’01 as the 2015 recipient of the St. Francis Xavier Award for Ignatian Identity.