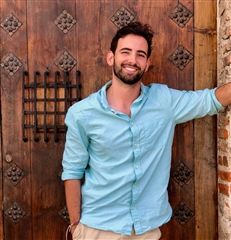 This award is given annually to a recent alumnus who, after graduation from Brophy, seeks to deepen his commitment to the ideals of Jesuit education in remarkable ways. Like St. Francis Xavier, who was moved by his encounter with Ignatius to boldly and selflessly live Ad Majorem Dei Gloriam — for the greater glory of God — the recipient of this award has been moved by his Jesuit education to find unique points of intersection between his talents and the needs of the world. Brophy is happy to announce that Joseph T. Slaven ‘09 has been named the 2021 recipient of the St. Francis Xavier Award for Ignatian Identity.
After graduating from Brophy, Joe headed east to the College of William and Mary where he received his degree in International Relations and Psychology, and then on to London for a Master of Science in Security Studies at University College London. He joined Jesuit Refugee Service in 2015 as the project director for higher education and took the lead of a makeshift university in Dzaleka Refugee Camp, a settlement of 25,000 refugees in Malawi. During his tenure with JRS, he worked with a network of Jesuit universities, including Regis and Georgetown, to build the local university in Dzaleka into an institution that offered accredited degrees to hundreds of students from the refugee camp with the goal of shaping them into leaders and innovators who would profoundly impact their camp communities.
After two years in Dzaleka, he moved to JRS partner organization, Jesuit Worldwide Learning, where he served as head of Global Site Operations and continued to oversee the university in Malawi as well as the organization’s other higher education institutions in refugee camps across Africa and the Middle East. He designed an Associate and Bachelor degree program in partnership with Southern New Hampshire University and laid the groundwork for a new partnership with Creighton University.

After leaving the humanitarian and higher education field in 2019, Joe joined Censeo Consulting Group in Washington, D.C., and most recently facilitated a mission strategy review within the Economic Development Administration, the only agency of the U.S. Federal Government exclusively focused on the economic development of U.S. communities, to determine how the agency might better deliver economic development support for distressed American communities.
While Joe’s work has encompassed many facets, like St. Ignatius, St. Francis Xavier and other members of the Jesuits, an emphasis on bringing education to refugees and others seeking a better life echoes the ethos that from the beginning has been a hallmark of the Jesuits. It is an honor and privilege to present this award to an alumnus who has so diligently put his Jesuit education into practice. Thank you, Joseph Slaven, for continuing to be a Man for Others.