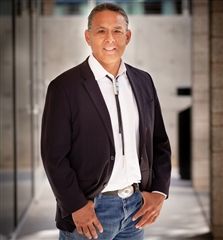 This award is given annually to a Brophy alumnus whose life and life’s work exemplify a sustained commitment to the values of Jesuit education. This is the Brophy community’s affirmation of one alumnus who is recognized and honored for the ways he personifies the Brophy Graduate after Graduation. The recipient of this award, like St. Ignatius, has earned the respect and admiration of the community because of the significant impact he has had on the lives of others, particularly those most vulnerable. Brophy is happy to announce that Deswood Etsitty ’88 has been named the 2021 recipient of the St. Ignatius of Loyola Award for Distinguished Service.
A member of the Navajo Nation, since 1995, Deswood’s work has focused on the development of healthcare architecture in Native American communities. A graduate of the University of Notre Dame School of Architecture, he noted in a recent interview that he came from a family of masons, carpenters and engineers, and that his “only goal was to help plan, design and build something important with my people.”

Deswood has achieved that goal many times over with pivotal roles in the planning, design and construction of hospitals and health centers in Indigenous communities throughout Navajoland and the western United States. Presently, he is the Director of Healthcare Facilities Planning for the Indian Health Service, Phoenix-area region, which oversees facility planning for 45 distinct Tribal Nations throughout Arizona, Utah and Nevada.
His upbringing in the rural region of Black Mesa, Arizona, among people of self-reliance and communal spirit inspired his design approach to integrate Indigenous healing practices, environmental sustainability and community voice into the modern healthcare design process. These ideas became a pathway to addressing historically inadequate reservation healthcare facilities due to failed federal treaties and socio-economic problems that have afflicted Indian Country for generations. Deswood’s projects cross a broad range of types with an affinity for remote communities — from a health center in his hometown, clinics in Alaskan villages, to urban and rural hospitals in Arizona. One current project about to start construction is a new clinic and staff quarters on the floor of the Grand Canyon for the Havasupai Tribe. As first learned from his elders, Deswood believes his role in healthcare architecture is to help uplift and strengthen communities, their unique cultures, spirituality and way of life.
Recently, Deswood was approached by the Notre Dame School of Architecture to facilitate a volunteer project with the St. Michael Indian School on the Navajo Nation, and along with professors, fourth-year students and St. Michael’s staff, to develop designs for a new K-12 school. Notre Dame students traveled to the Navajo Nation for site analysis, to learn about the St. Michael school and Dine’ culture and for community design presentations that helped obtain an initial million dollars in project funding. The project caught the eye of the University’s “What Would You Fight For” series resulting in a video shown at halftime of a nationally broadcast football game, putting the spotlight on this collaboration and Deswood’s unique role in the project — another example of his lifelong pursuit in architecture based on traditional Dine’ values, and in continued support of Indigenous and Catholic education.
As a Brophy alumnus who has continued to live the tenets of the Graduate at Graduation — intellectually competent, open to growth, religious, loving and committed to doing justice — we are proud and grateful to recognize Deswood Etsitty ’88 as the recipient of the 2021 St. Ignatius of Loyola Award for Distinguished Service.