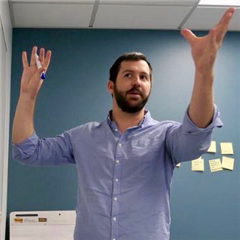 This award is given annually to a more recent alumnus who, after graduation from Brophy, seeks to deepen his commitment to the ideals of Jesuit education in remarkable ways. Like St. Francis Xavier, who was moved by his encounter with Ignatius to boldly and selflessly live Ad Majorem Dei Gloriam – for the greater glory of God – the recipient of this award has been moved by his Jesuit education to find unique points of intersection between his talents and the needs of the world. Brophy is happy to announce that Josephy Novotny '03 has been named the 2019 recipient of the St. Francis Xavier Award for Ignatian Identity.
In true Ignatian fashion — and following in the footsteps of St. Francis Xavier himself — Joe has charted a course around the world, a journey with one destination — to increase access to healthcare in poor and underserved communities while implementing systems to help countries improve public health goals.
Joe was still working on his undergraduate degree at Santa Clara University when he served as an intern with Catholic Relief Services focused on HIV/AIDS education among his college peers. Later, during graduate school at Boston University, he served as project coordinator for the Boston University Medical Center’s Clinical Addiction Research and Education Unit. There, he again worked on issues surrounding the AIDS epidemic, this time supporting the setup and tracking of research studies in Russia and India. He completed his master’s field work in Uganda where he led field implementation of a study on antibiotic use and antibiotic resistance across the country.
After graduating from Boston University with a Master’s in public health, Joe’s focus turned to malaria. Each year, approximately 435,000 people die from malaria — a disease that is preventable and treatable. Relocating to Africa, Joe became the Malaria Program Manager for the Clinton Health Access Initiative (CHAI) in Mbabane, Swaziland (now called Eswatini). There, he helped the country achieve an 86% decrease in cases while guiding the planning, implementation and evaluation of key anti-malaria interventions. In Swaziland, he supported the expansion of rapid diagnostic testing and worked to increase access to, and quality of, health services for malaria.
In 2014 he moved to Phnom Penh, Cambodia, as CHAI’s senior regional manager for malaria in the Greater Mekong Subregion. There, he was focused on working with national governments in Cambodia, Laos, Myanmar and Viet Nam to catalyze malaria elimination efforts intended to combat the threat of pandemic antimalaria drug resistance. In Cambodia, he managed a team of 30-plus members who worked to update national strategies, to improve implementation processes focused on extending community health services to remote, at-risk communities, and to strengthen the collection and utilization of disease surveillance data.
In fall 2017, Joe returned to the United States where he serves as the Global Malaria Adviser for CHAI, providing strategic guidance across 14 countries that are actively pursuing malaria elimination.
It is with great pride that Brophy recognizes Joseph Novotny ‘03 with the St. Francis Xavier Award for Ignatian Identity.