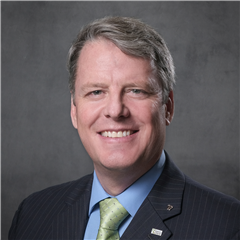 This award is given annually to a Brophy alumnus whose life and life’s work exemplify a sustained commitment to the values of Jesuit education. This is the Brophy community’s affirmation of one alumnus who is recognized and honored for the ways he personifies the Brophy Graduate after Graduation. The recipient of this award, like St. Ignatius, has earned the respect and admiration of the community because of the significant impact he has had on the lives of others, particularly those most vulnerable. Brophy is happy to announce that Paul S. Mulligan '88 has been named the 2019 recipient of the St. Ignatius of Loyola Award for Distinguished Service.
Every chapter in Paul’s journey has been steeped in servant-leadership, a steadfast commitment to those in need, and dedication to the Catholic community. As a young man, Paul’s first service was to his country. He received his commission from the U.S. Naval Academy in 1992, and for the next seven years he served as a surface warfare officer, propulsion engineer, and meteorology-oceanography officer. His tenure with the U.S. Navy included four years overseas.
After leaving the military, Paul dedicated the next decade of his life to nonprofit, pro-life leadership. He co-founded a pregnancy center in Guam (along with his wife, Michelle), directed a maternity home-network in the Washington, D.C. area, and commissioned a pro-life agency in Cote d’Ivoire, Africa. He returned to Arizona in 2007 to lead Catholic Education Arizona, and in 2014, was named president and chief executive officer of Catholic Charities Community Service, an agency founded in 1933 to serve our community’s most vulnerable citizens.
At Catholic Charities, Paul’s dynamic leadership has resulted in delivering high-quality, accredited services to more then 22,000 clients annually — a number that continues to grow. He has spearheaded leadership development for the 80-member Catholic Charities leadership team, and has built a culture of philanthropy that has resulted in a seismic increase in fundraising — $5.6M for the most recent fiscal year, up from $600,000 before his arrival.
In addition to his role at Catholic Charities, Paul volunteers his time on several boards and councils, including Catholic Charities USA, Arizona Partnership for Children, Housing for Hope and the Arizona Governor’s Council on Child Safety and Family Empowerment. Given Paul’s devotion to his faith, it is no surprise that he met his wife during the Papal Mass of Pope St. John Paul II at ASU. Paul and Michelle were seniors in high school attending the Mass at Sun Devil Stadium. They married in 1992 in Brophy Chapel and are parishioners at St. Francis Xavier Jesuit Parish.
Paul’s continuing education also reflects his passion. He earned a Master in Theological Studies from the John Paul II Institute for Studies on Marriage and Family, and also holds an Executive M.B.A. from the W.P. Carey School of Business at Arizona State University.
Brophy College Preparatory proudly and gratefully recognizes Paul S. Mulligan ’88 as the recipient of the 2019 St. Ignatius Loyola Award for Distinguished Service.