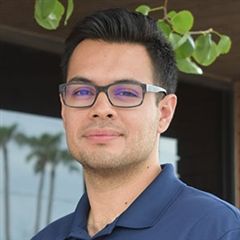 This award is given annually to a recent alumnus (15 years or fewer) who, after graduation from Brophy, seeks to deepen his commitment to the ideals of Jesuit education in remarkable ways. Like St. Francis Xavier, who was moved by his encounter with Ignatius to boldly and selflessly live Ad Majorem Dei Gloriam – for the greater glory of God – the recipient of this award has been moved by his Jesuit education to find unique points of intersection between his talents and the needs of the world. Brophy is happy to announce that Rodrigo Dorador ‘08 has been named the 2018 recipient of the St. Francis Xavier Award for Ignatian Identity.
The accomplishments of this year’s recipient are all the more remarkable because of the obstacles he has faced. As a young child, Rodrigo was brought to the United States where he entered fourth grade knowing no English. Four years later, he was admitted to Brophy and quickly embraced the challenges and opportunities of a Jesuit college preparatory education. Discouraged that he might not be able to go to college after Arizona passed Proposition 300 (which prohibited Arizona public colleges from offering in-state tuition to undocumented students), he nonetheless remained academically motivated and was awarded the Alberto Hurtado, S.J. Scholarship to attend Santa Clara University.
After graduating Cum Laude from Santa Clara with a B.A. in philosophy and a B.S. in economics, Rodrigo went to work for Immigrants Rising in San Francisco to advocate for increased college access for undocumented students. He worked directly with students, as well as consulting with state agencies and higher education institutions throughout California to encourage implementation of pro-immigrant policies. He estimates that the program he managed educated more than 75,000 undocumented youth on how to access higher education.
Subsequently, he went to work at the Be a Leader Foundation in Phoenix where he developed an app that integrated five data sources into a seamless platform that the foundation staff used to target, coach and track over 3,000 students through the college and financial aid application process. In 2017, the foundation’s efforts placed Phoenix as the third-highest-ranking city in the U.S. for increased FAFSA completed applications.
At Santa Clara, in addition to being a Saint Alberto Hurtado Cruchaga, S.J. Scholar, he received the Peter-Hans Kolvenbach, S.J. Award and was a Jean Donovan Summer Fellow. Currently, Rodrigo is enrolled at the Harvard University Kennedy School of Government pursuing a Master of Public Administration in international development and is a U.S. Latinx Leadership Fellow. He serves on the board of ScholarshipsAZ, a nonprofit that supports undocumented youth, and in that role co-founded Immigrant Scholarship Hustle, a program that trains undocumented youth to become self-sufficient scholars and college graduates.
It is with great pride that Brophy recognizes Rodrigo Dorador ’08 with the St. Francis Xavier Award for Ignatian Identity.