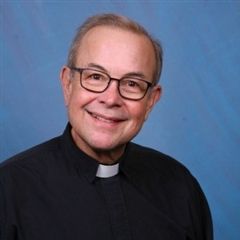 This award is given annually to a Brophy alumnus whose life and life’s work exemplify a sustained commitment to the values of Jesuit education. This is the Brophy community’s affirmation of one alumnus who is recognized and honored for the ways he personifies the Brophy Graduate after Graduation. The recipient of this award, like St. Ignatius, has earned the respect and admiration of the community because of the significant impact he has had on the lives of others, particularly those most vulnerable. Brophy is happy to announce that Peter Pabst, SJ, ‘72 has been named the 2018 recipient of the St. Ignatius of Loyola Award for Distinguished Service.
Fr. Pabst heeded the call of his Jesuit education to be a Man for Others in a most profound way – by joining the Society of Jesus in 1974 which led to his ordination in 1986. During this time, he earned a B.A. in philosophy and sociology from Gonzaga University, a Master of Divinity from the Jesuit School of Theology, and received a master’s degree in counseling psychology from Santa Clara University. In 1993, he returned to Brophy as Rector of the Jesuit community and subsequently became chair of the counseling department and taught psychology.
It was in 2000 that Fr. Pabst’s ultimate life work began when he returned to the Bay Area to found Sacred Heart Nativity School, a middle school for underprivileged boys in San José’s Washington-Gardner neighborhood. Six years later, he established Our Lady of Grace Nativity School for girls on the same campus. With the success of these middle schools in changing the lives of so many young people in this underserved community, he took on an even bigger challenge. In 2014 he became the founding president of Cristo Rey San José Jesuit High School on the city’s east side - an area known for its poverty and gang activity. Today, more than 100 middle school students and almost 500 high school students - all from low-income families - benefit from a Jesuit education that stresses academic excellence, work experience, and community service.
Fr. Pabst, now chancellor at Cristo Rey, was awarded an honorary doctorate from Santa Clara University in June 2018 in recognition of his role as founder of the three San José schools that educate and care for such a vulnerable student population. He serves on the boards of The Jesuit Retreat House in Los Altos, Bellarmine College Preparatory, and the University of San Francisco. Fr. Pabst remarks, “There are many fingerprints of those who shaped and formed me, beginning with some amazing Jesuits at Brophy back in the 60’s and 70’s. I can’t tell you how honored I am to receive this award.”
Brophy College Preparatory proudly recognizes Fr. Peter Pabst, SJ, ’72 as the recipient of the 2018 St. Ignatius Loyola Award for Distinguished Service.