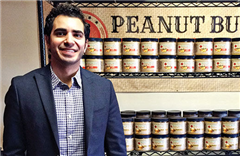 This award is given annually to a recent alumnus (15 years or fewer) who, after graduation from Brophy, seeks to deepen his commitment to the ideals of Jesuit education in remarkable ways. Like St. Francis Xavier, who was moved by his encounter with Ignatius to boldly and selflessly live Ad Majorem Dei Gloriam – for the greater glory of God – the recipient of this award has been moved by his Jesuit education to find unique points of intersection between his talents and the needs of the world. Brophy is happy to announce that Jeff Malkoon ‘05 has been named the 2017 recipient of the St. Francis Xavier Award for Ignatian Identity.
When Jeff Malkoon was a junior at Brophy, he never imagined that thirteen years later, the title on his business card would read “Head Nut.”  But, as founder of PB Americano, Jeff serves as the Head Nut for this innovative business which seeks to create “the most delicious, nutritious, and socially beneficial nut butters on the planet.”  The road that has led to Jeff’s current work began during his junior year when he served as a counselor at a summer camp for young people with Muscular Dystrophy.  Not only did this experience fulfill the requirements for Jeff’s school service project, it changed the trajectory of his life.  The following summer, he volunteered to return to the camp since he says, “I couldn’t imagine not going back.”  Jeff was also the president of the Life Choices Club and for all of his efforts was presented with the Christian Service Award at graduation.
After graduation, Jeff immersed himself in the study of world cultures and institutions at ASU’s School of Global Studies.  He studied Arabic in Amman, Jordan in 2007 and interned in the British Parliament in 2008. After earning his Master’s degree in Nonprofit Studies from ASU,  Jeff backpacked through Latin America with fellow alum Steve Londoño ‘05. While in Uruguay,  Jeff and Steve worked with TECHO, a Jesuit-founded relief organization, to construct emergency housing in the outskirts of Montevideo. Jeff says, “I began to see my future in the faces of the children there.”
Upon returning to Phoenix, supported by classmates Joe White ‘05 and Michael McGillicuddy ‘05, Jeff launched PB Americano - an enterprise that produces peanut butter and related products and contributes profit to TECHO to provide living-wage job opportunities for TECHO housing recipients. To date, PB Americano has contributed more than $10,000 to fund emergency housing projects with TECHO  in 19 Latin American countries.. Through its Fund for The Americas initiative, a nonprofit established by Jeff in 2014, PB Americano works with domestic organizations like St. Mary’s Food Bank, Jewish Family Services, and Andre House, supplying them with peanut butter. PB Americano can now be found in hundreds of retail locations and restaurants across the United States and Canada.
It is with great pride that Brophy recognizes Jeff Malkoon ‘05 with the St. Francis Xavier Award for Ignatian Identity.
Back