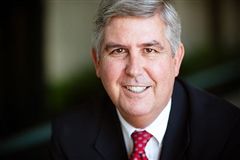 This award is given annually to a Brophy alumnus whose life and life’s work exemplify a sustained commitment to the values of Jesuit education. This is the Brophy community’s affirmation of one alumnus who is recognized and honored for the ways he personifies the Brophy Graduate after Graduation. The recipient of this award, like St. Ignatius, has earned the respect and admiration of the community because of the significant impact he has had on the lives of others, particularly those most vulnerable. Brophy is happy to announce that John Graham ’75 has been named the 2017 recipient of the St. Ignatius of Loyola Award for Distinguished Service.
For many years, John has been one of Brophy’s most loyal and dedicated supporters. As a Trustee and former Board Chair, he has provided material support and invaluable counsel throughout the implementation of Brophy’s strategic plan and has been recognized with the Brophy President’s Award. However, it is primarily for all of the work he does outside of Brophy that we honor him with this award.
Since 1990, John has been the President and CEO of Sunbelt Holdings. In this capacity, John’s thumbprint can be found on buildings and developments throughout Phoenix. In his “free time,” John has also left an indelible mark on organizations throughout Phoenix. He has chaired the governing boards of the Valley of the Sun YMCA, The Phoenix Symphony, the Nature Conservancy, Desert Botanical Garden, Herberger Theatre, Greater Phoenix Leadership, the ASU Foundation and Teach for America Phoenix. He has chaired capital campaigns for Banner Children’s Hospital, MD Anderson Cancer Center and O’Connor House, and he serves on the boards for the Banner Health Foundation, the Phoenix Zoo, the Heard Museum and Valley of the Sun United Way. Finally, John’s support of the Church and Catholic education extends beyond his long history of generosity at Brophy. He is a former trustee at Xavier College Preparatory and is a member of the Capital Campaign Committee at St. Francis Xavier.
This long yet incomplete list of organizations John has served is a testament to the depth of his generosity. He has left an enduring impact on the Valley. Jesuit education seeks to cultivate graduates committed to lives of generous service and so it is most appropriate that Brophy proudly honors John Graham as the 2017 recipient of the St. Ignatius of Loyola Award for Distinguished Service.
Back