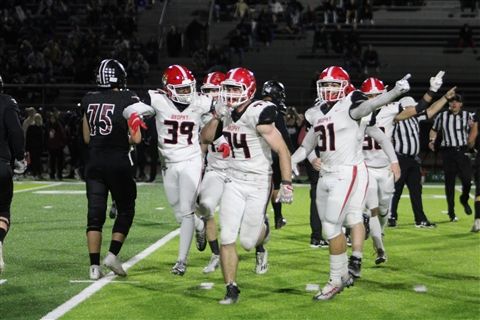 Football Season Ends in a 45-38 Loss at Red Mountain


“I told them I love them and I am extremely proud of them,” said Head Coach Jason Jewel in his postgame message. “What I am going to remember most about this group of kids is their resilience. They fought and fought until the very end. We are a young team and these close losses are going to help us in the future.”


“They have some good players and have two Division I skill players,” said Jewell. “They made some big plays down the stretch.”


Brophy opened the game with a 17-0 advantage. They scored on their opening drive with David Lopez scoring the first of three touchdowns. The Broncos added a field goal by Eddie Jetton off a Mountain Lion turnover and converted another turnover into points.


“It was an awesome start,” said Jewell.


Red Mountain cut the lead to 17-14 at the half and took their first lead 21-17 on the opening drive of the second half. The game would go back and forth the rest of the game with both teams recording big plays.


Devan Kennedy returned an interception 72 yards for a touchdown set up by a strip-sack for a 24-21 lead.  Red Mountain took the lead back 28-24 and extended the lead to 31-24. Brophy would tie the game at 31 on Lopez’s third touchdown.


Red Mountain went ahead 38-31 but Brophy tied the game with another big defensive play with a sack by Trey Markham, forcing a fumble recovered by David Sweetman in the end zone to tie the game at 38.


Red Mountain drove for the game-winning touchdown to lead 45-38. But the Broncos never quit, eventually with two plays broken up on the end zone in their final drive.


“We will be better for it down the road but I feel for our seniors that we were not able to finish this off for them,” said Jewell.


The game featured two lead changes and two ties in the second half as the teams combined for 52 second-half points after a 17-14 first half.