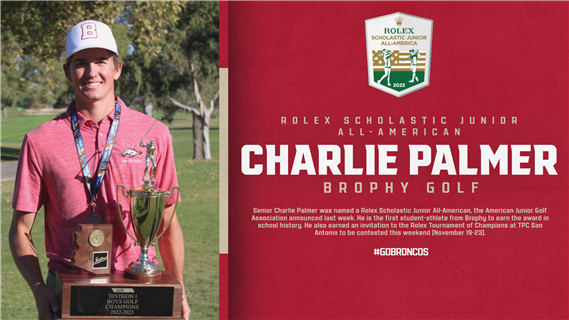 11/15/2022
Senior Charlie Palmer was named a Rolex Scholastic Junior All-American, the American Junior Golf Association announced last week. He is the first student-athlete from Brophy to earn the award in school history. He also earned an invitation to the Rolex Tournament of Champions at TPC San Antonio to be contested this weekend (November 19-23).
Palmer completed his senior season last month, finishing second at the AIA Division I State Championships. He was named to the All-Premier Region team and earned all-state honors with his Top-10 finish.
The 44 Rolex Scholastic Junior All-Americans are from 17 states, the District of Columbia and three countries (Canada, Taiwan, China). He is the only male player from Arizona and joins Xavier’s Annie Dawson in representing Arizona.
The AJGA partners with Rolex, a longstanding supporter of both the organization and of the sport of golf at all levels, to challenge the academic and athletic efforts of its members each year through the Rolex Scholastic Junior All-America honors. To determine this annual honor, the AJGA uses a junior's high school GPA to systemically compare applicants from the high school graduating class of 2023. In 2022, Rolex Scholastic Junior All-Americans averaged a high school GPA of 4.58, SAT score of 1507 and ACT score of 34.
Criteria to earn Rolex Scholastic Junior All-America honors include a top-10 finish in an AJGA Open or Invitational event (events played between Oct. 8, 2021 – Sept. 5, 2022), a minimum test score of 1450 SAT, 33 ACT and a minimum 3.5 weighted GPA on the 4.0 scale.
In addition, the top six boys and top six girls based on the Rolex AJGA Rankings who were not already qualified as of October 13, were invited to compete in the Rolex Tournament of Champions at TPC San Antonio - Canyons Course in San Antonio, Texas, November 19-23. The event annually gathers top players, including award winners, and signals the official opening of the next season of national junior golf competition for the Rolex AJGA Rankings.
Former Rolex Scholastic Junior All-Americans have gone on to successful amateur and professional golf careers, including: Casey Martin (1989), Wendy Ward (1990), Kellee Booth (1992), Cristie Kerr (1994), Matt Kuchar (1994), Boyd Summerhays (1994), Tiffany Joh (2004), Scott Langley (2005), Patrick Rodgers (2009, 2010) and Lauren Kim (2011).